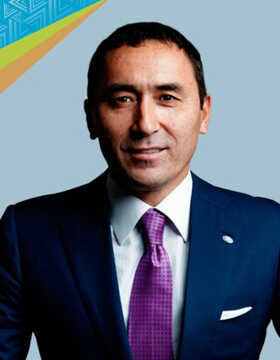 Mr. Rakhimbayev is the controlling shareholder and Chairman of the Board of Directors of BI Group Construction and Investment Company.

Aidyn Rakhimbayev has led his own small building company to the status of the country biggest construction holding, which turnover is of more than one billion dollars. BI Group handles 88 on-going projects in Kazakhstan and abroad. Over the past few years, the company has been keeping the leading positions in various national business ratings. More than that, it is the only enterprise in Kazakhstan which is included in the ENR top 250 international contractors list.

Mr. Rakhimbayev is the recipient of numerous state awards and prize, among others, he was awarded with Kurmet Order and the Honorary Diploma from the President of the Republic of Kazakhstan.

In 2016 he was included in the five top racers list at the international Silk Way Rally in Beijing. Aidyn is the participant of the triathlon races IRONMAN Vichy-2016 and the finalist of IRONMAN Barselona-2016.

Mr. Rakhimbayev is also well-known as the patron, initiator and partner of the large project "Mother's House". He is the trustee of several charity funds and special programs, aimed to promote medical rehabilitation, training and socialization of children with reduced capabilities. He is the founder of the annual city BI-Marathon.

Aidyn Rakhimbayev is married. He and his wife, Anar Rakhimbayeva, have 7 children. Mrs. Rakhimbayeva is the head of the charity project "Mother's House".