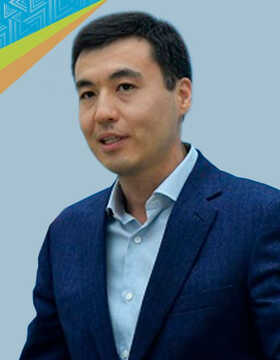 He graduated from the Academy of Economics and Management "Eurasian Market Institute" with a degree in “Economics and Management”, Kazakh State Humanitarian Law University with a degree in «Law» and the Executive MBA program of the School of Business named after Booth (The University of Chicago Booth School of Business). Participant of the charity project "Mother's House", member of YPO Kazakhstan, chairman of the Board of Trustees of the corporate fund "Courage to be the first", known as the organizer of the largest annual international sports event in the region "Almaty Marathon", First Vice-President of the Kazakhstan Triathlon Federation, head of the PA " Almaty Triathlon Federation", President of the Central Asian Triathlon Association (CATA), Member of the Board of ASTC. Initiator and founder of the Scientific - educational Foundation named after Academician Shakhmardan Yessenov, continuing the work of an outstanding Kazakh scientist and politician, academician of the Academy of Sciences of the Kazakh SSR, Doctor of Geological and Mineralogical Sciences.